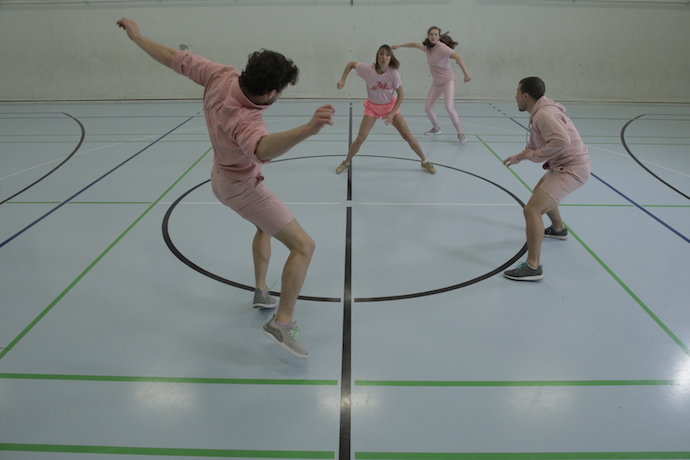 «If we examine how the word ‹play› is used and concentrate on its so-called transferred meanings, we find we talk of the play of light, the play of the waves, (…) In each case what is intended is the to-and-fro movement which is not tied to any goal which would bring it to an end. This accords with the original meaning of the word ‹Spiel› as ‹dance›.»

The main source of inspiration for «Game Theory» by Joshua Monten has been the many theories about why people like to play games.
Playing and as a consequence also gaming define us as human beings as much as language does or as our capacity to laugh. As such many philosophers, anthropologists, sociologists and even mathematicians have studied and reflected on the reasons why people play and have applied it to different fields. The Dutch historian and cultural theorist Johan Huizinga is probably the best known of these. Already in 1938, he published his Homo Ludens, which defended the creative quality of the play principle. Other ‹game theorists› such as Roger Caillois have created clever classifications of games. Callois distinguishes four types of play: plays of competition; plays of make-believe; plays of chance and plays of vertigo (such as spinning). More recently there is even a new discipline, called gamification, which applies elements of game design in a non-game context, mainly to motivate people and stimulate them to learn new skills or develop new habits. Think about the reward systems of many apps.

Play becomes game when rules and structures are introduced: often a strict(er) timing is set; a playfield defined with clear borders when you are in or out; certain virtuosic moves are desired while others are not or even are forbidden. If the rules are unknown or too complex the players and also their audience might get lost in the game.

«The game’s domain is therefore a restricted, closed, protected universe: a pure space. (…) The game consists of the need to find or continue at once a response which is free within the limits of the set rules.»

‹Finding freedom within rules› could also be a description of the creative process in contemporary dance. It often starts with the dancers improvising on tasks, invented by the choreographer. In the next stage, the choreographer has to organize this playful material in choreographic structures; often set to the timing of the music and spaced in relationship to the stage. The challenge of this process is to offer enough structure so that the work can be repeated and be followed by an audience. The danger would be to over-organize the material and lose some of the original live-ness and playfulness. In order to keep the performance alive, the dancers might have to push against the rules of the choreography.

The structure of «Game Theory» consists of different, clearly separated sections, like the sets of a match or the levels of a computer game. They each reflect a different choreographic game Joshua Monten likes to play, such as:

Game 1: Having music and choreography dialogue with a touch of irony.

Game 2: Gently manipulating the performers’, and as a consequence also the audience’s emotions.

Game 3: Exploring some of our so-called primitive states, resembling children or animals

Game 4: Creating virtuosic, intricate choreographic patterns which seamlessly fit into each other, like a Swiss watch maker.

In «Game Theory» the duet form is omni-present. It reflects how many games involve two sides (individuals or teams) competing with each other and how also in many children games there are always two clearly defined roles: such as the catcher and the ones trying to escape.
This dual structure also seems to reflect another dualistic aspect of our human nature, that between ‹winners› and ‹losers›. But the latter is not necessarily always a negative role. Some game theorists have argued that playing games is an important way to learn to accept failure.

«It would be not outlandish to say that much of the phantasmagoria of midchildhood has to do with learning how to cope with failure by playing with parodies of failing.»

Dealing with failure is also a recurrent motive in «Game Theory». It often adds a humorous undertone since failure is also the basis of all great comedy. «Game Theory» uses a lot of these existing theories about why people like to play games as a source of inspiration but in the end, the following quote by Michael Lewis probably best summarizes all of them: playing games is also just fun!

«The importance and meaning of play, at least for humans would appear to be in its affective function: in a word, play is fun.»