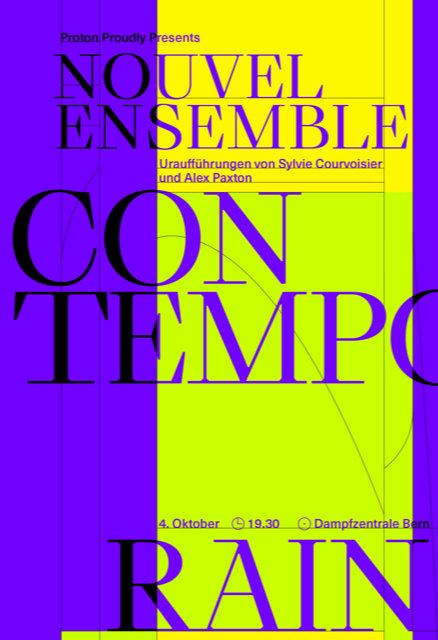 Nouvel Ensemble Contemporain has commissioned two artists to compose two works for an explosive concert between composition and improvisation, groove and psychedelia: Sylvie Courvoisier, a Swiss pianist and composer who has been living in New York for several decades, and Alex Paxton, a young, promising English composer and trombonist. Both oscillate between the worlds of classical music and contemporary jazz.

Proton Proudly Presents: Every year, Ensemble Proton Bern invites a contemporary music ensemble from another city to Bern. The renowned Nouvel Ensemble Contemporain NEC from La Chaux-de-Fonds gladly accepted this offer and will now play a world premiere by the French-Swiss pianist and composer Sylvie Courvoisier as part of Ensemble Proton’s residency. In return, Proton will also be allowed to give a concert in La Chaux-de-Fonds in 2023.